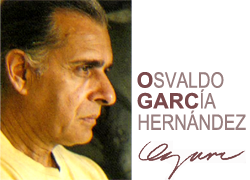 Painter, draftsman and teacher. Born in Cacocum, a town in Holguín, north of eastern Cuba. He was born on October 10, 1947, and since then in the home of one of his paternal uncles (a small merchant), in the absence of his father and mother.

Already at school age, he went to live in Las Tunas with another of his uncles, director and teacher of the La Regil elementary school, under an authoritarian regime, which did not prevent him, however, from drawing any comic strip that came to his hands, brought by her teachers, already aware of her fledgling talent.

Not being able to live then with his maternal grandmother, due to her economic precariousness, and the constant physical and psychological abuse of which he was a victim since his uncle's school and for this, being still very young, with barely ten years old, he rides in a train heading to Havana, where his father lived, with whom he sells lemons from the portals of Reina Street, sitting at the foot of his church, and in front of a classroom attached to the San Alejandro school.

The year 1961 arrives and the Literacy campaign, in which he joins, and makes a family of farmers literate in Arroyo de Mantua, near Cabo de San Antonio. Once finished, they grant him the scholarship to continue secondary studies in Marianao and Tarará. His fondness for drawing and painting was so great, whatever the setting: school, recreational places, neighboring houses, that one of his neighbors, and without his knowledge, enrolled him in a call published by one of national newspapers, to opt for a scholarship at the ENA (National School of Art), where he attends and is approved.

He begins his studies at the ENA, and in his first year, faced with the danger of not continuing, his perseverance in drawing was so significant that he earned from his peers the nickname of "Great Indian chief, tireless pen." He was a disciple of Servando Cabrera, Alpízar, Orlando Yánes and Adigio Benítez. His school was from then on and even after he graduated, his home. He graduated in 1968 and did his postgraduate studies in Baracoa and Holguín. Since the latter, Salón 70 is organized nationwide, where he participates from his exhibition at the National Museum of Fine Arts, with pieces such as The magic of them and The inevitable lover, pieces that must still remain in this institution.

He finishes his postgraduate degree and begins to work at San Alejandro, from where he continues his studies at the ISA, graduating in 1981. Along with his creative work, he trained as a drawing teacher at San Alejandro and the ISA, which earned him recognition in 2007 to be nominated for the National Prize for Plastic Arts. Since 1986 he is a member of the National Union of Writers and Artists of Cuba. He has made more than ten personal exhibitions with themes such as the portrait and its psycho-social profile, female sensuality, and more recently, the show Interior Dance, which recreates the theme of ballet. Likewise, in all his work, the taste for the figurative abstract is appreciated. He has more than 70 group exhibitions in Cuba, France, Italy, Colombia, the Dominican Republic, Spain, Mexico, and the United States; in the latter, with the Cuban Art Exhibition "Abanicos para siempre", in 2012.

He has done intense work as a book illustrator for Cuban and foreign publishers. At the Dulce María Loynaz Cultural Center, his drawings and paintings were exhibited, which appear in the edition of Amor es resucitar, by the Cuban poet, and has been recognized with the prize of "Art of the book" and "Literature in the Plastic".

His works are in private collections in Cuba, the United States, Luxembourg, Ireland, France and Russia, among others. He lives in Havana, is married and has three children, two girls, a boy, and three grandchildren.