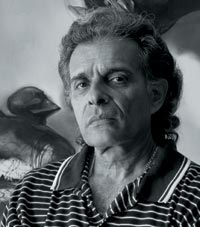 Born in Holguín, Cuba, Osvaldo García is a cuban modern artists graduate of ENA and ISA and a Professor at the National Academy of Arts, San Alejandro, Havana, Cuba. Osvaldo Garcia, member of the “Union de Escritores y Artistas de Cuba”, (UNEAC) has firmly established himself nationally as a leading artist who ranks along side the more internationally renowned painters such as Flora Fong, Tomas Sanchez and Cesar Leal, to mention but a few.

Osvaldo García has been in a long and difficult trip to become this excellent exponent of contemporary cuban painter to work in "what people don’t want to recognize", as he himself explains the theme of his most recent painting. Taboos and paradoxes, like death, are expressed in a mature work realized by a secure hand that knows where it’s going. "His dark series’ reveals the presence of the tense dialogue between a figuration out of the detectable world and certain great gestures of conduct that constitute an unraveling in the archetype of human identity," as Cuban critic Alberto Garrrandés has written. 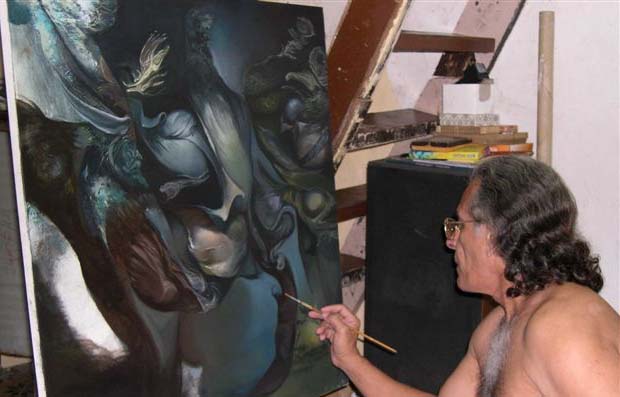 He was noted then for an expressive singularity that clearly spoke of a painter with his own identity. Time has polished his forms and concepts, leaving his own unequivocal signs of art that reach and transcend the moment in which it is produced.

With his “dark series” – which is sometimes for the topic and not for the color – Osvaldo García incursions into an ambience of pictorial representation that has seldom been seen by artists in this country and that recalls, in a certain way, the fantasies of master Fidelio Ponce, who is still a reference that signals the talent of this creator – who for a long time, formed a generation of new Cuban painters – among whom he deserves to be listed in the foreground and first line of the successful painting of today. Constancy is perhaps one of his most admirable qualities. That and his faith in what he does.

My homage to Alicia, the Artist, who like nobody else and with inordinate beauty danced her equally with pain and happiness. She honored me with her presence in my "Danza interior" exhibition, where I in turn honored her with an oil on canvas in the interpretation of Carmen.